Questions 1–3 refer to the following paragraph.

The Brookside area is an older part of Kansas City, developed mainly in the 1920s and 30s, and is considered one of the nation’s first “planned” communities with shops, restaurants, parks, and churches all within a quick walk. A stroll down any street reveals charming two-story Tudor and Colonial homes with smaller bungalows sprinkled throughout the beautiful tree-lined streets. It is common to see lemonade stands on the corners and baseball games in the numerous “pocket” parks tucked neatly behind rows of well-manicured houses. The Brookside shops on 63rd street between Wornall Road and Oak Street are a hub of commerce and entertainment where residents freely shop and dine with their pets (and children) in tow. This is also a common “hangout” spot for younger teenagers because it is easily accessible by bike for most. In short, it is an idyllic neighborhood just minutes from downtown Kansas City.

1. Which of the following states the main idea of this paragraph?

Answer: Brookside is a great place to live.

Explanation: All the details in this paragraph suggest that Brookside is a great place to live, plus the last sentence states that it is an idyllic neighborhood, meaning it is perfect, happy, and blissful. “The Brookside shops are a popular hangout for teenagers.” and “There are a number of pocket parks in the Brookside neighborhood.” are incorrect, because although they do contain specific details from the paragraph that support the main idea, they are not the main idea. “Brookside has a high crime rate.” is incorrect because there is no reference in the paragraph to the crime rate in Brookside.

2. In what kind of publication might you read the above paragraph?

3. According to this paragraph, which of the following is unique to this neighborhood?

Answer: It is one of the nation’s first planned communities.

4. Which of the following is not an example of a good thesis statement for an essay?

Answer: Industrial waste poured into Lake Michigan has killed 27 percent of marine life in the past decade.

Explanation: This sentence would not be a good thesis statement because it conveys one very specific detail. All the other answer choices would be good thesis statements because they are general enough for an entire essay but specific enough so that the reader knows exactly what the essay will cover. 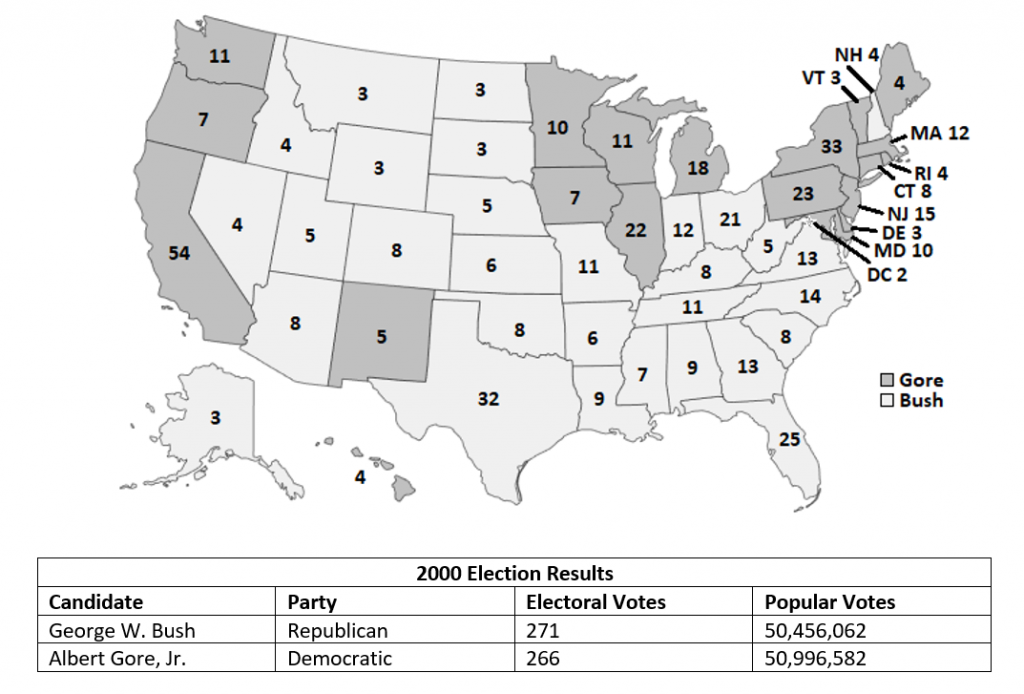 5. Based on the map, which of the following statements is NOT true?

Answer: In 2000, the Democratic candidate won the popular vote, which means he won more the electoral votes of more states.

Explanation: The Democratic candidate did win the popular vote, but he lost the electoral votes by five, and a closer look at the map reveals that he only won 21 out of the possible 50 states. All the other statements are correct.

6. Consider the following headings that might be found under the entry for “Basketball” in an electronic encyclopedia. Which one does not belong?
• Introduction
• Basic Rules
• Professional Basketball
• College Basketball
• Similarities to Lacrosse
• Olympic and International Basketball
• Women’s Basketball
• Bibliography

7. The guidewords at the top of a dictionary page are receipt and reveal. Which of the following words is NOT an entry on this page?

Explanation: The word revere would not be an entry on this page because the letters rever would come after revea in alphabetical order. All the other answer choices contain letters that would come between receipt and reveal and would therefore appear as entries on this page.

9. If you were looking for the most reliable and up-to-date information regarding the safety of travel overseas, which of the following websites would be the most accurate?

Explanation: This is the correct answer because the “gov” indicates that this is a government website. If you are traveling overseas, the U.S. government would be a reliable and up-to-date source of information, especially in regard to travel safety. While the other websites may contain some helpful information, and may indeed be worth reading, blogs and wikis may not be as reliable.

10. Follow the numbered instructions to transform the starting word into a different word. What is the new word?
1. Start with the word CARLOAD.
2. Move the first letter to the end of the word.
3. Switch the first and second letters.
4. Switch the third and sixth letters.
5. Change the fourth letter to an i.
6. Move the last letter before the second a.

Explanation: Following the steps in order will change the word carload into the word radical.